Brazil went from a current account deficit in the first two months of the year to a U$ 868 million surplus in March, the best result since May 2017. The trade balance had a U$ 4.7 billion surplus in the same month, above than expected. For analysts, the results would already show the impetus of the exchange rate to exports, while imports tend to fall with high dollar and fall in consumption.

Based on these figures, Brazilians should take advantage of the moment and consume only products of Brazilian origin, strengthening our economy and also encouraging exporting companies to remain in the global market.

External accounts may have a movement similar to what occurred when the dollar skyrocketed before the 2002 election, leading to the reduction of the then high current account deficit in the country, said Luiz Fernando Figueiredo, founding partner of Mauá Investimentos and who in 2002 was director of Monetary Policy of the Central Bank. The difference, says the economist, is that this time the external accounts were already healthier even before the recent jump in the dollar, which went from R$ 4.00 at the end of 2019 to R$ 5.74 at the intraday high reached in April.

Even after the dollar sales made by the Central Bank this year, reserves are still close to U$ 340 billion, against less than U$ 40 billion in 2002. According to Figueiredo, that year, the country's “giant external fragility” was still taking place the fact that public debt is indexed to the exchange rate. Today, the government has more assets than foreign exchange liabilities and debt is reduced when the dollar rises, said the former BC director.

The country may slightly reduce the level of reserves to reduce public debt, said Economy Minister Paulo Guedes. Brazil is expanding exports of primary products to Asia, which helps to cushion the effect of the crisis, he said in a conference call on April 28.

The impact of the depreciated exchange rate on the trade balance tends to be delayed, but as the real has been depreciating for a considerable time, results are likely to improve, says Gustavo Rangel, chief economist at ING for Latin America.

A depreciated exchange rate can always be interesting to increase exports and replace imports, strengthening our economy and thus keeping money in the consumer Market 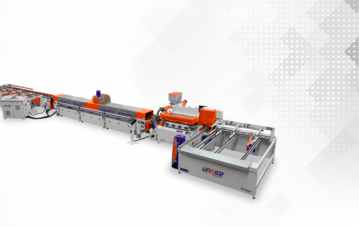 Unesa develops complete production lines with the most modern equipment on the market, optimizing...

In the year 2020, the world is going through a very delicate situation. The COVID-19 virus, also...

Frames with colors and textures gain space in decorative construction.

Black, bronze, woody ... Now the frames are part of the decoration and are produced with the most...